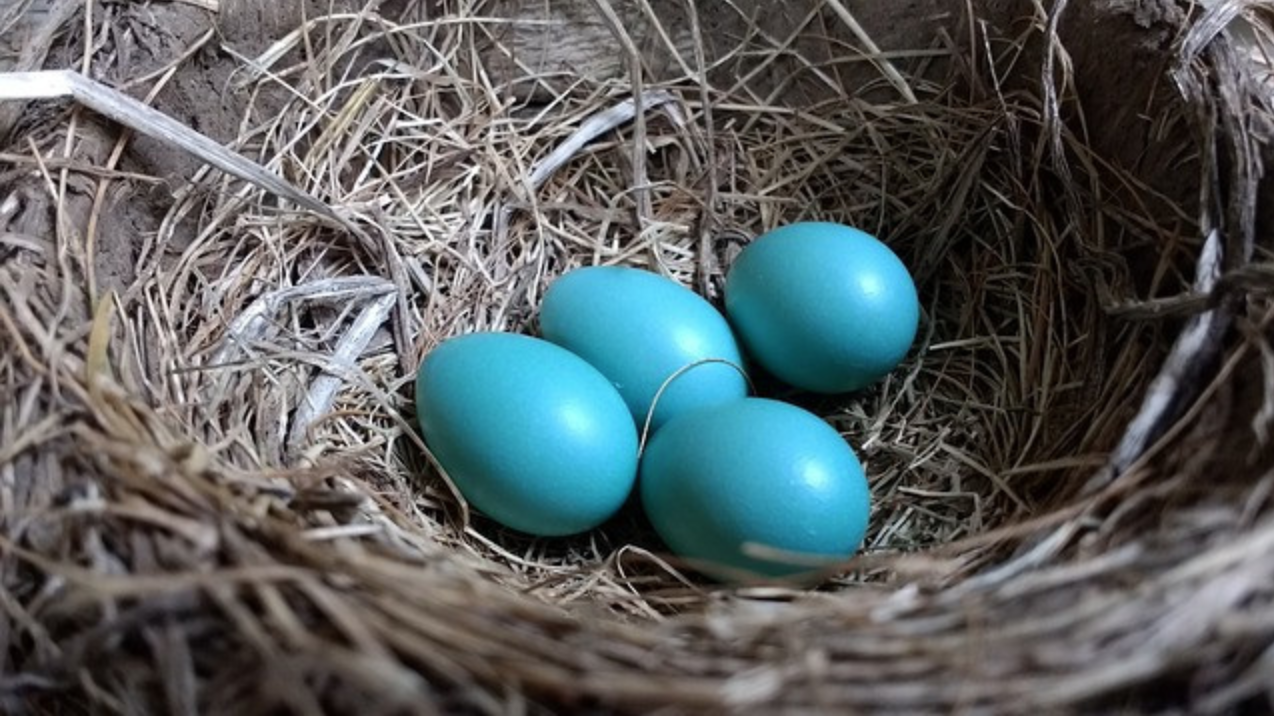 As you may know, my wife and I have been in our new house in Lewes, Delaware, for a little over a year and have gone through two spring seasons and several bird nests already. We had one unsuccessful finch nest on our front door wreath during the first spring, followed by a successful robin nest the second spring in the exact location. Before we destroy a perfectly built nest, we wanted to know, do robins reuse nests?

While robins don’t reuse nests, they can use existing nests’ structures to build a new nest if it’s the right location.

The consensus is that robins don’t reuse nests. Meaning they don’t take last year’s nest and use it again as is. In general, female robins build new nests each year. But while they may not reuse the same nest, we have evidence that they will build on top of existing nests.

In the spring of 2020, we had a finch nest in our front door wreath with eggs that never hatched. The interesting story about this nest is that it included three finch eggs and three cowbird eggs.

Cowbirds are considered brood parasites, which means females don’t do any of the rearing jobs. Instead, they lay their eggs in other birds’ nests, and the other mother bird unknowingly raises the cowbird babies. As I said, in our case, unfortunately, none of the eggs hatched. This is the picture of the nest in spring 2020 with the three finch eggs and three cowbird eggs.

By the way, we also had a Swallow’s nest this spring.

This year, spring of 2021, a pair of robins took over the finch nest, double its size, and laid three beautiful blue eggs of their own, two of which hatched. You can see some pictures below. This, by the way, made us wonder what other birds lay blue eggs.

With the empty nest, now that the baby robins have happily flown away, we can see what a fantastic job they did. I have to say that the nest the robins built on top of the finch nest was of much better quality. Indeed an engineered marble. You can see a couple of pictures below. The nest feels so solid and durable to the touch.

Robins tend to build round nests, although our nest is not a perfect circle. It measures 4 inches wide and 5 inches long and comfortably accommodates a tennis ball.

How Robins Build a Nest

We couldn’t film our female robin building our nest, but this video below, filmed by Roger Bindl, shows another female robin patiently building another nest. Notice the unique way she builds it. She presses dead grass, twigs, and mud into a bowl shape construction using the wrist of one wing.

Should You Move a Robin’s Nest?

Some of you may be thinking, this is very cute so far, but I am tired of having bird nests on my property. Can I move or remove a robin’s nest?

I had this very question when we realized that we had a bird’s nest going on in my dryer vent.

Some of you may be surprised to hear that you can’t just do anything you want to an active nest.

The Migratory Bird Treaty Act (MBTA) protects most bird nests. Under this act, “No person may take (kill), possess, import, export, transport, sell, purchase, barter, or offer for sale, any migratory bird, or the parts, nests, or eggs of such bird except as may be permitted under the terms of a valid permit…”

Although there are exceptions for birds considered non-natives or invasive birds such as house sparrows or European starlings, I would be cautious. I wouldn’t remove any active bird nest until you contact your State Fish and Wildlife Department.

You may still think that it is ok to move the robin’s nest to another location away from your property. Unfortunately, if you move the nest, the mother robin will likely think that a predator has messed with her nest. She may not even recognize the nest as her own and will abandon it along with her nestlings, regardless of whether or not they have hatched.

Should We Keep the Empty Nest for Next Year?

Some people argue that it is best for the robins to get rid of the empty nest because of the potential of parasites. Apparently robins have a tendency to tear existing nests apart and start from scratch. Yet other people note that it is not even legal to remove empty nests.

It is illegal to remove it but it is also bad to keep it because of parasites. So, what should we do? We are going to keep it because it doesn’t bother us on the wreath. We’ll update this blog post next Spring. I’ll let you know what happens…

3 thoughts on “Do Robins Reuse Nests?”