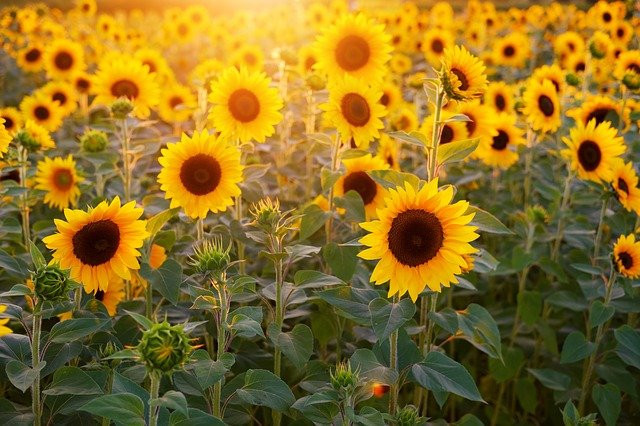 Heliotropism is an amazing phenomenon that is worthy of exploration. Continue reading to learn all about it and why sunflowers follow the sun.

What Do Sunflowers Do on Cloudy Days?

If you observe young sunflowers throughout the day, you will see that they start out facing the east, and they turn to face the sun as the sun moves across the sky. Then, overnight, they will reset and turn back to the east to be ready to start over again when the sun rises.

Researchers have studied this, and UC Davis biologists found that they are genetically coded to activate the east-facing half of the stem to grow during the day. This causes the head of the sunflower to slowly bend to the west throughout the day. Then, once it is night, the genes cause the west side of the stem to grow, which allows them to turn back to the east.

So as the UC Davis Biologists note, they move by the clock. Cloudy days do not prompt them to move.

In fact, once sunflowers are fully mature, they face east all the time. This allows them to heat up more quickly, which in turn attracts pollinators. Sunflowers that are facing each other, whether on a cloudy day or not, simply aren’t growing at the rate of others. It has no connection to the cloudy day.

What Is Heliotropism in Sunflowers?

Sunflowers are one of a number of plants that use the light from the sun efficiently by turning to face the sun. Heliotropism is the phenomenon where flowers start out facing the east and turn to the west throughout the day. Then, overnight, they turn back to the east to start over again when the sun rises.

Heliotropism is also called phototropism, and it is easy to observe it in your sunflowers. They are more flexible when they are young, and they are dependent on photosynthesis so that they can make the food they need while they are growing. In addition, they receive more heat when they face the sun, which attracts pollinators such as bees. Their rate of pollen germination is increased by the heat as well.

Why Do Sunflowers Droop Down?

Both young and old sunflowers can droop over. This can be caused by a lack of water, disease, or pests. It happens when they are top heavy. If they need water, you will notice that the leaves are wilting. While they can handle some drought conditions, they need water for photosynthesis, and they can’t survive without it for long periods of time.

Sunflowers also droop at the end of their life cycle. When you plant sunflower seeds, they will germinate, and the roots will push into the soil. Next, the shoot sprouts up out of the soil towards the sun. Finally, the leaves begin to open, and the stem and leaves grow. You will see a bud start to unfold when the flower opens. It blooms, and it will follow the sun during the day. Once it is mature, it will settle in and face east.

When it is at the end of its lifecycle, the petals of the sunflower will begin wilting. Then, the flower will shrivel up, and its seeds will fall to the ground for the next batch of sunflowers. Once these seeds settle in the soil, the cycle will begin again.

By the way, birds love black oil sunflower seeds and you can easily grow sunflowers from sunflower bird seed.

Proof that Sunflowers don’t Face Each Other On Cloudy Days

Some people may think that all that we said above is just theory without proof. This is why I wanted to take it one step further. This video from Eden Quest shows a field of sunflowers’ time lapse starting at the bloom stage. If you look at it carefully, there are several cloudy days, and I didn’t see any of the sunflowers facing each other at any time.

Sunflowers do not face each other on cloudy days. Instead, they track the sun due to a process called heliotropism.