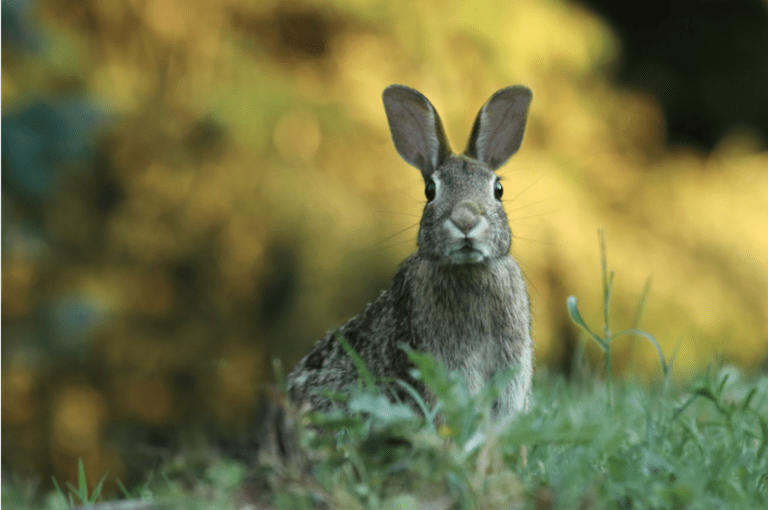 As far as wild animals go, it’s safe to say that rabbits take the cake for being the cutest. Rabbits are pretty benevolent and tend to live in harmony with humans and other animals. Rabbits can be domesticated and kept as pets, which many people tend to do as an alternative to cats or dogs. When in captivity, rabbits eat rabbit pellets, hay, and all kinds of vegetables. But in the wild, rabbits have a slightly different diet, which begs the question, what do wild rabbits eat?

We have been in Delaware for a couple of years now and noticed how many wild rabbits there are, especially in spring. A few days ago, we saw the cutest two rabbits right by the bedroom window of our new house in Lewes, Delaware. We thought that it would be nice to feed them food since they must be hungry. So, it was time for me to research the topic.

While out in the wild, rabbits are primarily herbivores, meaning they only eat plants. For the most part, wild rabbits survive on grass. Their diet depends on the season. In the cold months, they eat tree bark, twigs, and even pine needles because other forms of plant life are scarce during that time. During the summer, you can find them munching on clover, leafy weeds, dry and green grasses, shrubs, or tree seedlings.

Rabbits Can Be Picky Eaters

Just because rabbits eat most of the vegetation they find around them, it doesn’t mean they aren’t picky eaters. If it were up to them, wild rabbits would only eat fresh foliage. In fact, they will go as far as to climb trees and logs to access only the freshest plants they can get. This is because wild rabbits like to eat the part of the plant with the highest nitrogen content.

But because they are in the wild, they can’t be too picky. Rabbits also like to eat their food quickly, not to spend unnecessary time being a target for predators. This means that if a particular plant or leaf is taking a bit too long to collect, the rabbit will move on from it to a more accessible food source. Typically, rabbits will graze on grass for about the first half-hour they are out looking for food. If they feel safe enough, they will allow themselves more time and be pickier about what they eat.

When Do Rabbits Eat?

Wild rabbits have set times for when they go out to look for food—dusk and dawn. The consensus is that this time eating habit has more than likely been chosen for safety. It is a fact that predators are most active during dawn and dusk. So, rabbits need to be awake and ready to hide or escape from a dangerous situation.

Rabbits’ plant-based diet is not easy to digest due mainly to the presence of cellulose. Rabbits have solved this issue with a digestive process known as hindgut fermentation, which is also characteristic of other herbivores with a simple, single-chambered stomach.  Cellulose is digested with the help of bacteria present in the large intestine and cecum.

Unlike ruminants such as cattle which have a four-chambered stomach and chew regurgitated food (known as chewing the cud), rabbits reingest their own droppings to gain nutrition.

In terms of water, rabbits need a large and constant amount of it. Studies have shown that water intake is more important than food intake for a rabbit to retain its weight. Without the water they need, rabbits will have a harder time digesting the food they eat.

What Do Domesticated Rabbits Eat?

Unlike wild rabbits, domesticated rabbits eat less grass and more hay, dry food, and the occasional rabbit treat. For the most part, a pet rabbit’s diet should consist of hay, some fresh vegetables, and a small number of pellets. Baby rabbits should be fed alfalfa sprouts because it has more protein, something baby rabbits need to continue to grow.

Hay is particularly good for adult rabbits because it provides them with the necessary fiber to have good digestive health. Hay is also good at helping a rabbit wear down its teeth, which continuously grow and need to be maintained. Did you know that rabbit teeth grow at a fantastic rate of 3 mm per week!

If you base it on TV cartoons, rabbits should eat a lot of carrots. But that couldn’t be further from the truth. Rabbits should not eat carrots often because they are high in sugar. You can think of carrots as candy for rabbits.

Rabbits are also big fans of vegetables, so pet owners can feed them things such as bok choy, basil, kale, mint, carrot tops, celery, cilantro, and lettuce. However, be careful with the type of lettuce you feed your rabbit. Surprisingly, light color lettuce like Iceberg contains lactucarium, a chemical known to be harmful to rabbits.

You may want to read this Suggested Vegetables and Fruits for a Rabbit Diet put together by the House Rabbit Society, a non-profit rabbit rescue and education organization.

Most people agree that it is not a good idea for humans to directly feed wild rabbits as they may become entirely dependent on humans for food, which can be harmful to them in the long run.

How You Can Help Hungry Bunnies

However, you can always indirectly help feed them by planting shrubs and greenery that they like to eat. If you do, be sure that you’re not using any pesticides or fertilizers that may have added chemicals that can be dangerous to the rabbits.

If you’re not too particular about keeping your backyard looking pristine, you can always allow your garden to overgrow a bit and let wildflowers grow rather than pulling them. Rabbits like to eat dandelions and clover in particular, so letting them grow in your yard will be an additional food source for the wild rabbits.

As mentioned earlier, food may be harder to find for rabbits during the winter. If you know rabbits live in your backyard and want to help, you can always leave out bowls of food for them but try and keep from making this a habit.

During droughts or a dry season, it may be hard for rabbits to get the water they need in the wild. As a result, it is okay for you to leave out water bowls for them to help them stay hydrated. Be sure to change out the water bowl at least once a day to prevent bacteria from growing.

What not to Feed Rabbits

Now that you know what you can feed wild rabbits, it’s important to talk about what not to feed them. Things such as birdseed and nuts are foods you should keep away from rabbits as they cannot properly digest them.

The Difference Between Wild and Domestic Rabbits

You may think that you can just adopt a wild rabbit and will become domesticated over time. That’s is not the case. To start, in most US states, it’s illegal to keep a wild rabbit as a pet without a permit. All domesticated animals, including rabbits, have been carefully bred to significantly reduce the dangerous and unpredictable traits most wild animals have. So, bottom line, a wild animal will always be wild.

This video goes over the difference between wild and domestic rabbits you should consider before trying to tame a wild rabbit.