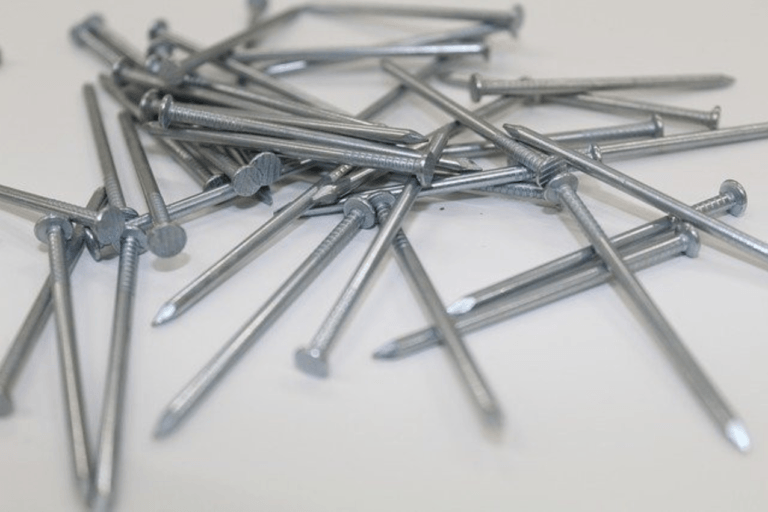 Nail pops, also known as popped nails, are a frequent problem in many homes, including new ones. When people see them, they sometimes panic because they don’t understand why that problem occurred. But, are nail popos really that serious?

In many cases, nail pops are just a cosmetic problem, which is relatively easy to fix. However, their presence can sometimes indicate more serious problems, like foundation issues. Luckily, if that is the case, there should be additional clues to help you assess how serious the issue is.

If you are not dealing with a new home, you also need to determine if the nail pops are minor or significant enough to call a contractor.

Before we take any steps, let’s go over why nail pops appear in the first place.

What Causes Most Nail Pops?

For a nail to pop, movement of drywall or wood has to occur. If you didn’t have an earthquake in the area, you might be wondering how it can move. The answer is pretty simple.

Most houses in the USA are built mainly out of wood. These wooden components are frequently stored outside, and although they are entirely safe to be used for building a house, they have a certain percentage of moisture. When the house is completed and insulation is installed, the wooden components start to dry over time.

When the wood dries, it will shrink a bit and slightly change shape. These transformations are tiny but large enough to cause the wood to shift or shrink just slightly.

Drywall and wood are attached with nails, which can also move and pop out. You will notice small bumps on the wall, or in some cases, even see the top of the nail coming out. While this looks bad, especially in your well-decorated and newly built house, it is not a severe problem. It usually appears during the first 12 months after the house is built, and it is strictly a cosmetic concern.

How to Repair Nail Pops On Drywall

Most frequently, nail pops occur on the walls, and there is a simple method to fix it. On the right, you can see an example of one of several nails pops in my new house.

If you just return the nail or screw into its original place, it will probably pop up again after some time. Try to push the nail back in or gently tap it with a hammer to keep everything in place. If it is a screw, screw it back but be careful not to damage the drywall.

After that, take two drywall screws and place them into the stud. Position one above the nail and one below, about two inches apart. These screws will keep the drywall in place, and you won’t have a nail pop problem again. Repeat the process in other locations where nail pops appeared.

When choosing the right screw, make sure it is long enough for the job. Not all drywalls have the same thickness, and when the screw goes through the drywall and into the stud, it should penetrate the stud for about one inch.

Screws will make small but visible holes, and their head will be slightly below the face of the drywall when installed. Fill these holes with a drywall joint compound and flush it with the surface. When it dries, you can re-paint the wall. Depending on what you use, it can take 1 day to dry.

This video below shows how you can do this.

How to Repair Nail Pops Appearing On the Ceiling

When nail pops occur on the ceiling, many homeowners think they have a problem with trusses or some similar, serious issue. Most commonly, that is not the case. The thing is, there is a chance that your drywall was not properly installed. To be sure, I would advise you to call a professional to do the inspection.

Pre-constructed trusses are used to build many modern homes, and those are made in a way that they can slightly move as humidity and temperature change. This may sound similar to the walls’ problem, but these trusses will move every time the conditions change, not just when they initially dry out.

Don’t worry about the trusses themselves; they should be OK. However, the drywall installing technique may not have been the correct one. Your drywall may have been installed directly onto the trusses when it shouldn’t have.

If installed incorrectly, the trusses movement can cause drywall edges to break, and the only way to resolve this issue is to reinstall the drywall correctly.

How Do I Know if I Have a Foundation Issue?

Sometimes, nail pops can indicate a more serious foundation problem. Luckily, there are other tell-tale signs of it, and if you notice any of them in addition to nail pops, you should call a professional and schedule a detailed inspection. If you are like me within the 1-year warranty of a newly built home, you should let your builder know in writing.

When you notice nail pops, also search for these other signs to see if you may potentially have a structural issue:

Doors and Windows Not Closing as They Should

Foundation problems can cause your home to literally sink a bit in one area, which will change the walls’ alignment. One of the first signs that something is wrong is that doors and windows can’t properly close.

Cracks Around Doors and Windows

When a wall’s alignment changes, it may cause cracks in places that are the weakest, around doors and windows. Check around the house and see if there is anything suspicious.

If you noticed any of the previously mentioned signs in addition to nail pops, you might want to take a look at your foundation (your basement if you have one). Search for visible cracks or water damage. Although at this point, you should probably call a contractor to assess the situation too.