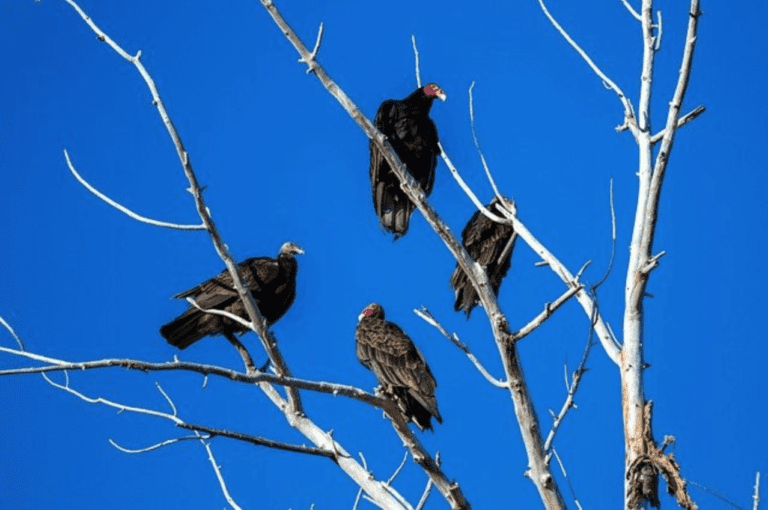 When you see turkey vultures for the first time, it feels like you are watching a western movie after someone has been killed. At least that’s the impression I had when we moved to Delaware –they are all over. So, since I am not used to them, I was wondering, are turkey vultures dangerous?

Turkey vultures don’t hunt live prey, feed only on dead animals, and are not dangerous to humans. When they are threatened, they will try to defend themselves by hissing and regurgitating, which is disgusting but not harmful to humans or pets. I found no evidence of aggressive attacks by turkey vultures.

After researching this topic, I have learned that there are many misconceptions about turkey vultures and many urban myths, based more on fear and less on facts.

What Exactly Are Turkey Vultures?

Turkey vultures are widely spread through North America. They don’t kill; they eat what is already dead. That is why they are classified as scavengers. In urban areas, like Delaware, they often consume roadkills.

Turkey vultures are large birds, about 2.5 feet tall on average, and have a wingspan of around 6 feet. But surprisingly, these birds are very light for their size, averaging 3 pounds.

Their small, red, and naked head appears disproportional to their large body, but it is actually an adaptation for their feeding needs. The small size helps them get flesh in small spaces. A featherless head prevents sickness from bacteria accumulated in the feathers.

Speaking of adaptation, most animals would get sick from eating certain dead animals, but not turkey vultures. They have developed a very acidic digestive system that kills most bacteria from dead animals.

Turkey vultures locate their “food” using their sight and a highly developed sense of smell while soaring in the sky. They frequently fly in circles and take advantage of rising columns of warm air called “thermals.”

As majestic and agile as they are in the sky, they are not so graceful on the ground. They make clumsy hopping moves as they walk and spread their wings awkwardly as they try to take off.

As they soar in the sky, some people perceive them as birds from a horror movie, waiting for someone or something to die on the ground.

Do Turkey Vultures Ever Attack Humans or Small Animals?

As already mentioned, turkey vultures feed on dead animals and present zero danger to small animals or children. I was initially worried that they could hurt our little corgi (Luna), but I am not worried now.

If you have ever seen these birds, you may have noticed that they are non-aggressive and somewhat timid. In some cases, they are easily frightened and tend to fly away when something or someone is approaching them.

That’s not to say that they can’t “fight” and defend themselves. Like any other animal, if they are threatened, they will defend themselves, and you should not approach them with aggressive intentions.

Many people would assume that a bird of that size will scratch or bite when to defend themselves, but actually, that is not the case.

Turkey vultures have a disgusting but efficient, and harmless to humans, defense mechanism. They will vomit or defecate on a human or animal threatening them and “launch” their vomit 10 feet to reach their perceived enemy. They also use hissing as a way to keep threats away.

If you have a dog or any other pet that goes outside, you shouldn’t allow this pet to harass turkey vultures or let the animal chase them. Although they are not interested in your pet chihuahua as food, they could feel threatened and attack to defend themselves.

I think these birds are only dangerous while you are on the road. As they tend to feed on roadkill animals when they have a chance, there is a small possibility that you can try to avoid a collision and have a car accident.

Some farmers would disagree with these statements. Some of them insist that turkey vultures kill calves, but there has been no evidence supporting this claim. It is more likely that some other animal killed the calves and that the vultures were feeding on decaying leftovers.

Can I Get Rid of Them From My Property?

In certain situations, and when you have a valid reason, you can request a Migratory Bird Depredation Permit to have them removed, but it is not a simple process, and it comes at a certain price.

Some people like them, and feed them. So, if you have a neighbor who does this, kindly ask them to stop. If you start giving them food, more and more of them will arrive. Their feces can make a mess all over your property.

Keep in mind that these birds are vulnerable. As our cities are spreading, they are losing their habitat, and because humankind caused animal numbers to drop, their food sources also dropped.

If you want to get rid of them legally and simply, but without a permit, you can try to install bright lights and reflective surfaces around your yard, which turkey vultures tend to avoid.

Another possibility is to study their behavior to see what is attracting them. If you have a problem with pests, they may feed on the dead ones. Or they are digging through your trash.

Try to eliminate the cause, and if it is an issue throughout the neighborhood, you can talk to neighbors and find a feasible solution to the problem when you identify the cause.

Think of Turkey Vultures as Nature’s Free Clean Up Crew

Turkey vultures have a bad reputation because they hand around dead animals. But here is the thing, they didn’t kill them; they are there to clean the mess.

By eating diseased animals, they stop spreading diseases that may harm humans and other animals.

The video below shows that turkey vultures are part of nature’s clean-up crew we should be thankful for.