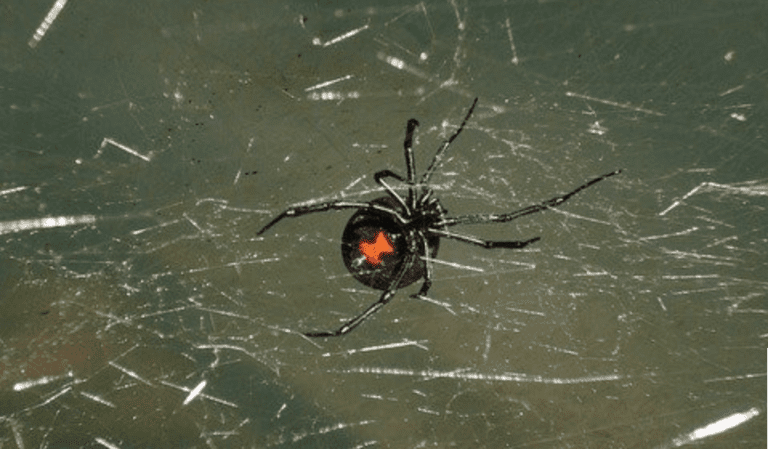 When you hear “dangerous animals,” you will probably think of lions or giant spiders and believe that you are safe because none exists in your area. Unfortunately, dangerous animals live everywhere, and not all are easy to recognize. And it also depends on your definition of dangerous.

Delaware is generally a safe place considering the many potential wildlife hazards out there. However, it is home to numerous snake species, spiders, and deer. Yes, deer; more on that below. Some of those may present a real danger for people.

We recently moved to Delaware from Pasadena, California. The most dangerous animal in the residential area we were living was another human. I feel that Delaware is different. Nature is ever-present here, no matter where you are.

So I wanted to research and find out what dangerous animals live in Delaware and what we need to do to be safe.

Timber rattlesnakes are native to many parts of North America, and they are venomous.

They usually have bulky bodies and feature the famous rattles at the tail’s end. Adults range from 2.5 to 5 feet in length, but there are records of Timber Rattlesnakes longer than 6 feet. They are typically gray, sometimes with a touch of pink, and have a stripe throughout their body.

When hiking, especially during spring when the snakes are not warm enough to be fast, you should be careful. These snakes are quite large and like to spend time in the sun. If one of these snakes bites you, it can cause severe injuries and sometimes death.

If you wear boots that protect your ankles and make a lot of vibrations while walking, snakes will usually run away. The problem occurs if you surprise each other, or you step on one by accident.

Below is a video showing what these snakes look like. A hiker was looking for wild blueberries and stepped within 6 inches of this enormous Timber Rattlesnake. This situation can happen to any of us, showing how easy it can be to be beaten by one of these snakes.

How to Stay Safe From Timber Rattlesnakes

What to Do if You Get Bitten by a Rattlesnake

Keep calm, move beyond the snake’s striking distance, if you can, but do not run. If you can, position yourself so that the bite is below heart level until medical help arrives.

Do not use a tourniquet or apply ice. Do not cut the wound or attempt to remove the venom. Try to remember the snake’s color and shape to describe it to medical personnel, or take a picture with your smartphone if it’s safe. But do not try to capture the snake.

Adults range from 2 to 3 feet in length and some can reach 4 feet. Copperhead snakes typically have thick bodies and copper-colored or reddish, brown heads and bodies. But colors may vary from yellowish to reddish-brown.

Probably the easiest way to recognize them is by the hourglass-shaped bands on their bodies. Sometimes they also have small spots between the bands. You can identify young Copperheads by their bright yellow tail tip. They use it to attract prey such as lizards and frogs.

Northern copperhead is not likely to kill you, but the venom will cause localized severe tissue damage. To avoid getting bitten, you can follow the same precautions as with Timber rattlesnakes above.

The video below shows a graphic example of a person who got beaten by a Copperhead snake. It also goes over how to avoid them and what to do if you can’t.

It may be consoling to hear that the Centers for Disease Control and Prevention (CDC) estimates that 7,000–8,000 people per year receive venomous bites in the United States, and only about 5 of those people die. However, the CDC clarifies that “the number of deaths would be much higher if people did not seek medical care.“

Black widows are poisonous spiders. Although they can bite humans, cases of severe reactions are rare. However, black widow spider bites can be serious to young children, older adults, and other people with a compromised immune system.

If you get bitten, you can expect muscle pain and spasms after 30 to 40 minutes of been beaten, and you should get medical help immediately.

Only females are poisonous, and they are also larger. You can recognize them by a red hourglass-like pattern on their abdomen, but some of these spiders have different colors.

An interesting fact about black widows: You may have heard about toxic relationships between men and women, but you haven’t heard a thing until you know about “black widows” couples.

The large females will often eat the smaller males during sex. That’s why they have their name “widow” in their name. Now that’s what I call a toxic relationship!

Thankfully the black widow is the only poisonous spider found in Delaware. That’s not to say that you are going to play with all other spiders you find in Delaware. For those who are allergic, a spider bite can cause serious complications. Even if you are not allergic, a bite from certain spiders can result in unpleasant reactions.

This very popular video below proves that black widow spiders aren’t necessarily aggressive and only bite when threatened. Coyote Peterson locates one of these females spiders and lets her walk all over his hand and arm. If you suffer from arachnophobia, this may not be a video for you.

How About Brown Recluse Spiders

On the topic of spiders, let’s talk a little bit about Brown Recluse Spiders. There are many claims on the internet of brown recluse spiders sights in Delaware. However, based on the University of California Riverside’s Brown Recluse Spider map below, Delaware is not an area they are typically found.

The most logical explanation for this confusion is that most people are not good at identifying spiders and they make up stories unintentionally. There are about 3,000 species of spiders in North America. Even entomologists have a hard time to identify certain spiders.

That’s not to say that they may get there by traveling through agricultural or other products transported to Delaware. If you happen to see one, you should know that these spiders are small but dangerous. When they bite, they release necrotic venom, which means it can cause the death of cells or tissue. For humans, this is not deadly, but you should seek immediate medical help if you are bitten by one.

Their bodies are usually brown, and the color varies from light to dark. Brown recluse spiders can be found outside and in woodsheds or similar locations that are undisturbed by people. These spiders are usually not aggressive but will bite when threatened.

How About Brown Wolf Spiders

Unless you have an allergic reaction to their bite, a Wolf spider bite is not typically dangerous to humans. A typical response to a Wolf spider bite includes localized pain and redness, which gets better soon for most people. Of course, if your symptoms worsen, you should call a doctor.

Wolf spiders are sometimes mistaken for tarantulas and brown recluse spiders. They are often large, brown, and hairy, and you will not see them spinning webs to capture prey. Instead, the hunt like “wolfs”. Thus, their name. You may see them walking with a big sac underneath. That’s how they carry their eggs.

In the video below, Cajun Boy (Zachary Gray) finds, catches, and free handles a large Brown Wolf spider. It is a good video to be able to identify them, but not if you suffer from arachnophobia.

Ticks are sneaky little creatures that attack many mammals, including humans. They can bite your pets too.

Some ticks can transmit different diseases, including Lyme disease, which is a potentially serious bacterial infection. Lyme disease is transmitted by blacklegged ticks, also known as deer ticks.

Ticks are tiny. Adult ticks can be the size of sunflower seeds, and nymphal ticks are much smaller and difficult to see sometimes.

When you go hiking, or visiting some parks, wear a repellent (make sure it is for ticks too, not just mosquitoes). Protect your legs and arms with long pants and sleeves, and wear a hat. Upon arriving home, inspect your body for ticks, including hair.

Here is a very informative video from Science Insider about ticks. It teaches you to be very careful with these nasty little creatures.

You are probably wondering why deers are on this list. These calm, beautiful looking and easily scared animals can be hazardous. Coming from the urban area of Pasadena, California, I wouldn’t have believed this if you have told me a couple of years ago.

We have been in Delaware for almost two years now, and it is rare the week I don’t see a deer alive or unfortunately dead on the road. I have personally have had several instances already of deer crossing in front o my car. A couple of times so close that I am surprised I haven’t had an accident yet.

There are numerous car accidents caused by deer running across the road. A study from the US Department of Transportation “estimates that there are between one and two million collisions between vehicles and large animals in the United States every year.” Many of them are due to deer.

Living in Delaware, I feel that you always have to be on alert because a deer can jump out of nowhere in front of your car. Drive slowly and obey the speed limit. Be extra careful while driving through nature and at night.