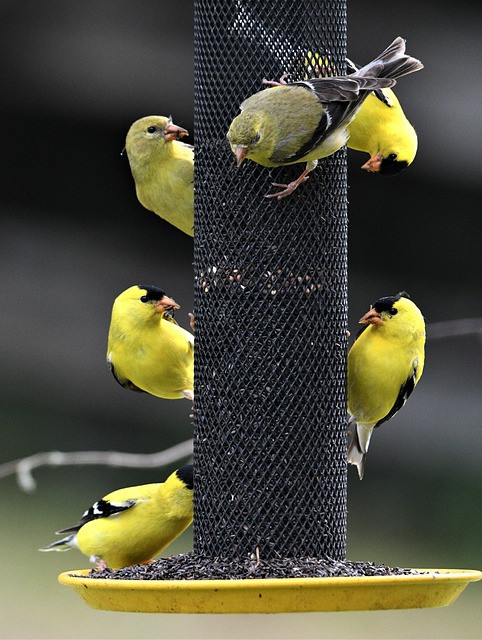 My wife wanted to attract goldfinches in our garden, and she heard that Nyjer seeds are good for that. So we bought the bird feeder, added Nyjer seed, and started to see them coming the next day! People typically feed the birds in tube feeders or mesh sock feeders. Since I didn’t know anything about Nyjer seed, I thought this was a good moment to learn as much as I can about it.

Nyjer seeds will attract a variety of finches and other birds to your yard. It is often called “black gold” because it is expensive. It has a hard shell, so it can leave a mess beneath the feeder. In addition, it will spoil if it sits uneaten for too long. People often refer to it as thistle seed, but it is not the same, and it comes from a completely different plant.

Let’s go over the 10 things to know about Nyjer seeds.

1. Nyjer Seed Is Not Thistle Seed

Guizotia abyssinica is the scientific name of the Nyjer seed and oil. This seed goes by other names, including niger and nyger. It is believed to have originated in Ethiopia, Eritrea, and Malawi and it is also grown in India.

The word Nyjer® is a registered trademark of the Wild Bird Feeding Institute. According to this Institute, the purpose of the trademark is “to eliminate product confusion and the offensive mispronunciation of Niger as well as to promote a positive image for the use of Guizotia abyssinica as a wild bird feed.”

People often mistake Nyjer seed for thistle seed, but they are totally different. Nyjer comes from a plant in the same family as sunflowers, and it looks similar to a sunflower seed, although they are quite smaller.

I don’t know why they do this. The only thing I can think of is that people confuse the two terms so much that they are trying to reach those customers that call it thistle instead of Nyjer. Please let us know in the comments if you have an idea as to why this is happening.

Why It Is Important Not to Call it Thistle

The distinction is important because thistle has a terrible reputation as a nasty weed with sharp spines and invasive roots. As you can see from this video from Garden Well Eat Well, you don’t want to deal with thistle in your garden or yard.

2. Nyjer Seed Has a Shell

Although Nyjer seeds are very small, they do have shells. You will see these shells on the ground under the feeder, and they can turn into a mess if you don’t clean them up. When people don’t realize that they have shells, they think the birds aren’t eating the seeds. However, on closer look, they see that it is the hulls from the seeds.

3. Moldy Nyjer Seed Must Be Removed

Nyjer seed can spoil if it is in the feeder too long. It is the most expensive seed you can buy, so you will want to prevent it from going bad. If you don’t have many birds feeding, you should replace the seed every three or four weeks.

The seeds tend to clump if they sit untouched, so you can shake the feeder each day to move them around. This will help prevent mold from growing. Some feeders have a quick release base. If you add seed to the bottom, this helps to prevent the bottom from sitting too long and growing mold. If you see any mold on the Nyjer seeds, you should remove them and dispose of them safely where no animals will try to eat it. You can clean your feeder with a bleach solution.

4. If Nyjer Seed Dries Out, Birds Won’t Eat it

The Nyjer seeds are oily, and they provide energy for the birds that eat them. However, they can dry out over time. If you keep a large bag of Nyjer seed for a long time, it can dry out. The same problem exists if it sits in the feeder too long. Make sure that you don’t buy more than you can use in around two or three months to avoid this problem.

5. Certain Feeders Are Better Suited for These Tiny Seeds

Nyjer seeds are so small that one pound can be made up of as many as 130,000 seeds. Therefore, you need to use feeders that are made for Nyjer seeds to prevent waste.

Another type of feeder is a mesh feeder. They have a plastic or metal mesh that makes up the body of the feeder, and the birds can hold onto the feeding surface while they pick the seeds through the holes in the mesh. They don’t have any specific feeding ports because the birds can cling to the surface as they pull the feedthrough another small opening.

Sock feeders are the third popular type for feeding Nyjer seed. The socks are made of nylon and birds can cling to them, but they can adjust to the size of the seed that remains inside. They are more affordable than other feeders and they are easier to clean.

You should not feed Nyjer seeds on an open feeder because there will be a lot of waste.

Nyjer seed is commonly used to attract finches, including American Goldfinches, Purple Finches, and House Finches. In addition, it will draw Indigo Buntings, Pine Siskins, and Red Polls, as well as other birds.

7. Nyjer Seed Is the Only Major Bird Seed That Is Imported to the United States

Almost 20% of all imports of Nyjer seed come to the United States, which has an import value of $169.18 Million. In 1985, the Department of Agriculture started requiring that imported Nyjer seed be heat-sterilized to prevent it from germinating. The reason for this is to prevent the entry of noxious weeds, in particular dodder. But, again, this has nothing to do with thistle.

In addition to being popular for bird seed, Nyjer seed is also used in international cuisine, especially in southern parts of India. The seeds are used to make cooking oil, and they are ground and fried to use in different recipes.

9. Nyjer Seed Is High in Nutrition

Nyjer seed is an excellent source of nutrients for both birds and people. It is high in fiber and protein, and it has calcium, iron, and other nutrients. It is a great food to use in the winter because it gives birds the calories they need to store fat and stay warm.

As an added bonus, neither rats nor squirrels are interested in Nyjer seed. This is because the seeds are too small for them to get a meal out of it. Also, the specialized feeders make it very difficult for rats and squirrels to get much out of it.

5 thoughts on “10 Things to Know About Nyjer Seeds”