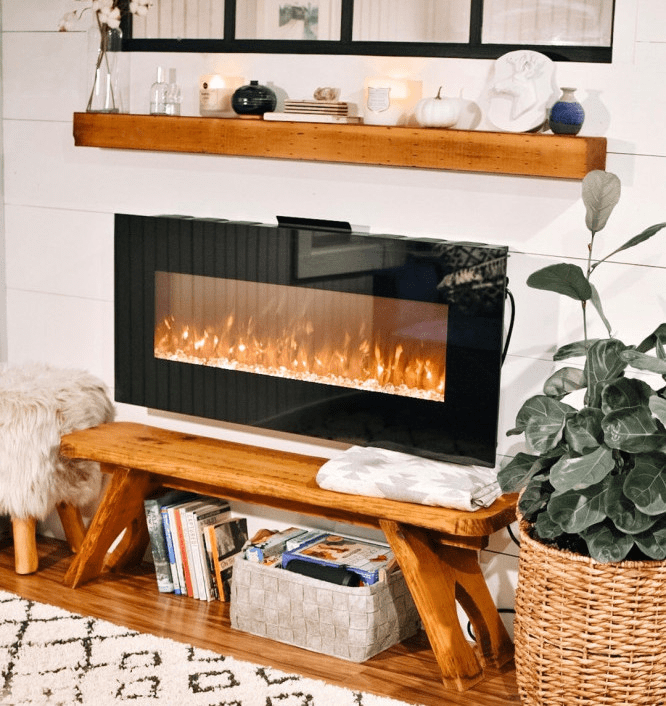 One of the best ways to make a room relaxing and peaceful is by having a fireplace. It is great on a cold winter night as it is cozy and inviting. Some believe that there is nothing better than a wood-burning fireplace, but not everyone can or want to have a real fireplace. For these people, an electrical fireplace may be a suitable alternative.

While electric fireplaces have many advantages and are no longer considered tacky, they also have disadvantages. Let’s go over some of these in more detail.

When electric fireplaces first came out, people thought that they were tacky. They were obviously fake, and they didn’t really make you feel as though you were sitting in front of a fire.

Today, there are many styles available and they come in all sizes. They allow people to create the ambiance of a cozy room with a fire no matter where they live or what time of year it is. They are no longer considered tacky because they are more realistic.

Fire has been essential to people since the beginning of time. It provides warmth in the winter, and as a side effect, it is relaxing. People don’t need to light a fire in today’s world because they have central heat in most places. However, they might want the look and feel that comes with having a fire burning in the room. These are some of the advantages of electric fireplaces.

Electric fireplaces offer many more decor options than traditional fireplaces. Because it has no real fire, you will easily find a style to blend with your current decor.

Most of them use LED lighting to create a realistic image of a fire burning in the room. There are all kinds of options, from logs with flames to fire coming out of the sand surrounded by pebbles. So, you can create a personalized mood in the room. And they often have a remote control, so you can conveniently run it from your couch.

And just because there is no fire, doesn’t mean you can not feel the heat. Most models today can generate warmth similar to a space heater. So, if you like the look and enjoy the heat, it will almost feel real. As an added bonus you can use them in the summer without the heat.

Safer Than a Real Fireplace

With electric fireplaces, you don’t have to worry about harmful gases and fumes. There are also no worries about creosote buildup or fire hazards from flames.

They are cool when you touch them. If a heater is attached, it blows out hot air, but it usually won’t burn you. They usually have an automatic shut-off if they get too hot, and there is never any smoke or a release of chemicals.

Easy on Your Wallet

Installation costs are much lower than a typical real fireplace. Therefore, they are an excellent option for someone renting a home or someone who wants to add a fireplace to their home. Building a fireplace can be very expensive when you don’t have one, so this is a great economical alternative.

Although they are no longer considered tacky by most people, electric fireplaces also have disadvantages.

It’s Hard to Compete With the Real Thing

I am biased here. We have a wood-burning fireplace, and we love it, but it truly is hard to beat the unmistakable look, feel and smell of a real fireplace. Electric fireplaces have come a long way, but it is just not the same.

Power Outages Will Ruin the Mood

The beauty of fire is that it is ancient and primal and not dependent on electricity. Even gas fireplaces require electricity to ignite the pilot light. When you have a wood-burning fireplace, that’s not an issue.

Heat Cost Can Be Pricey

When electric fireplaces first came out, they looked as fake as they were. People often thought they were tacky. However, with the advances in technology, modern electric fireplaces have a realistic, customizable LED image on a screen, and they come in many different styles and sizes. They easily integrate into a room, allowing you to create the mood and feeling you want. Although it is hard to replace the real thing, they are now considered an attractive element that can help create a warm, relaxed, and inviting ambiance.