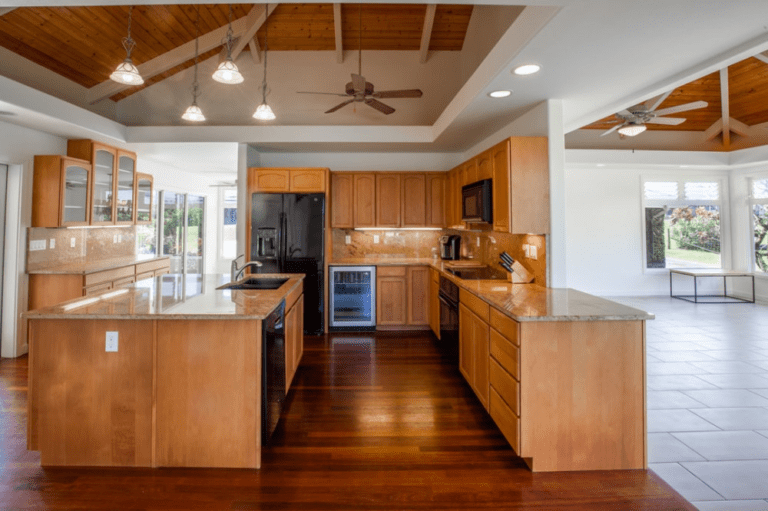 Adding a ceiling fan to the kitchen can be challenging, as you may already have light fixtures, cabinets, and other objects in the way. However, some people want to add a ceiling fan in this room where people spend a lot of time today.

Having a ceiling fan in the kitchen can be a good idea when you live in a warm area that makes your kitchen hot. Otherwise, it doesn’t make much sense as you will probably not be using it. When it makes sense though, it can help to cool your kitchen and making it more comfortable. It can also help you reduce your energy consumption, circulate still and stagnant air, and get rid of cooking odors or smoke.

Let’s go over the pros and cons of having a ceiling fan to help you decide if it is a good idea.

Benefits of Having a Ceiling Fan in the Kitchen

There are good reasons to have a ceiling fan in the kitchen.

The Downside of Having a Ceiling Fan in the Kitchen

In spite of the benefits, there are also several reasons why people don’t install ceiling fans in the kitchen.

Aside from the above pros and cons, the two overwhelming considerations people face when deciding to install a ceiling fan in the kitchen or not are style and climate. And for this decision, climate trumps style.

What I mean by that is that not too many people choose to have a ceiling fan in the kitchen if they live in a cold area. In other words, if your kitchen doesn’t get too hot when you cook, you are not likely to install a fan just for the looks. As nice as some of them are, for this decision, it’s definitely ‘function over form.’

On the other hand, if you live, say in Texas where the air feels like soup sometimes, you probably are considering a fan in the kitchen even if it doesn’t look too nice.

Fluorescent lights are another interesting topic to consider in the kitchen.

How to Choose a Ceiling Fan for Your Kitchen

If you want to add a ceiling fan to your kitchen, you need to evaluate your space. Ceiling fans can be large and take up space, so the first thing you need to do is make sure that you find a fan that is proportionate to the space. This will give you a balanced look in the room and ensure that the fan is working efficiently.

Make sure that the blades from your fan don’t interfere with any cupboards or light fixtures. You should also decide whether you want a fan with light fittings or without. There are all different kinds of blades, from modern sleek blades to fat wooden blades.

Another consideration is the controls or functions that the fan has. It might have seasonal settings, and some fans allow you to adjust the lighting and the speed of the fan. Some fans even come with remote control. They can reverse direction to remove hot air in the summer, and they often have an Airflow rating to let you know how powerful they are.

Having a ceiling fan in the kitchen can be a good idea mainly if heat is an issue in your kitchen and you have the space for it. Make sure that you choose a ceiling fan that is the right size and style for your kitchen, as there are quite a few options available. It can help your AC run more efficiently or it can cool your kitchen on its own and circulate the air, but be prepared to clean it more frequently.