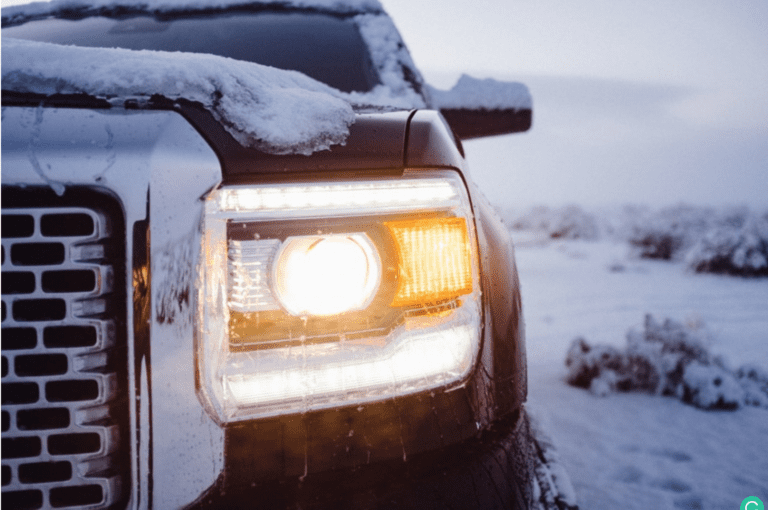 “Black ice” – I had never even heard of this term before moving from sunny LA to Delaware.

But it’s definitely a phenomenon in winter climes, and it apparently injures over 135,000 people a year. That’s pretty serious business. So how exactly do you know if you are driving in black ice conditions?

The biggest indication that you’re driving over black ice is that your car begins to slip and slide, rather than respond, as you try to steer. If this begins to happen, and the temperature is at or below 32 degrees Fahrenheit, watch out. You may well be driving on black ice. Because you can’t always see the ice (more below), it’s best to be in tune with your car’s performance (or lack thereof) when you’re driving in freezing weather.

What is “Black Ice”?

Black ice, in reality, is not actually black at all. It is a thin layer of ice that forms a layer on road surfaces in winter. Because we mainly worry about the effects of this ice on black asphalt roads, people have come to call it “black ice.”

There are conflicting descriptions of what black ice actually looks like. Some sites report that asphalt with black ice will be “slightly darker and duller than the rest of the road surface.”

Others, however, like AAA, tell us that black ice looks slightly glossy, more like “wet pavement.” Either way, everyone seems to agree that it’s basically hard to see — and this is exactly why it is considered so dangerous to drive on.

The upshot:  If you’re driving in cold weather and you’re worried about whether or not you’re dealing with black ice, it’s best not to trust your vision but rather the feel of your car.

Black ice typically piggybacks with winter rain or snowfall. The process begins when moisture hits the road either via rain or snow, especially at night or early mornings. In the case of snow, when the sun comes out and begins to warm things up, snowfall on the road begins to melt.

Then, later in the day, when temperatures start to cool off again, ice forms and voilà, the dreaded “black ice” phenomenon.

==>You may want to also know if you should salt your driveway before It snows. And think twice before you eat yellow snow.

Special Dangers With Bridges and Overpasses

According to Wikipedia, bridges and overpasses are especially liable to form black ice. This is because they have two surfaces that are exposed to the cold air, rather than just one. As they put it, “Black ice forms first on bridges and overpasses because air can circulate both above and below the surface of the elevated roadway when the ambient temperature drops, causing the bridge pavement temperature to fall more rapidly.”

The good thing about bridges and overpasses, though, is that helpful warnings are usually posted to apprise us of the possible dangers. Wikipedia lists the most common signs that we’ll usually see. They include things like:

What to Do Should You Actually Encounter Black Ice?

Of course, it’s all fine, and good to be aware that black ice can be a problem in the winter.

However, it is perhaps more important to actually know what to do if you suddenly realize your car is starting to lose control.

First of all: DO NOT PANIC. Panic can elevate your risk of doing something impulsive and getting into even more trouble.

Instead, experts tell us to do the following:

Useful Tips to Prepare for Winter Driving in General

In addition to knowing about the black-ice disaster recovery steps (above), there are many useful driving tips we should employ every winter to be as safe and prepared – and as proactive — as possible. These include:

If you prepare your car well for winter road conditions, if you drive cautiously and remember the four critical steps for maintaining control of your car while driving over black ice, you can be a road warrior for all seasons!