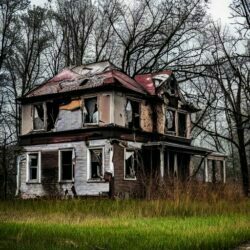 My wife and I were driving around a couple of weeks ago, and noticed a few run-down, abandoned houses, and were wondering how they got that way. We soon found out that abandoned houses don’t get that way overnight. It’s often a slow process that starts with the excitement of buying a new house and ends with a dilapidated house on a street somewhere. Let’s take a look at this phenomenon a little closer.

More often than not, people abandon their houses due to unpleasant and often hard-to-avoid situations. This can include job loss, deterioration of the neighborhood, or environmental factors like severe weather conditions, among other things.

But before we get into the specific reasons, let’s go over the difference between vacant and abandoned houses.

Vacant vs. Abandoned Houses: There is a Difference

People often use these two terms interchangeably. And although I couldn’t find legal definitions for these two terms, there are clear differences between the two.

In other words, all abandoned homes are vacant, but not all vacant homes are abandoned. According to the United States Census Bureau, in 2020, 9.7% of housing was vacant, but fortunately, just a small percentage of those will become abandoned.

Losing a job often leads to debt problems. If you can’t find a job for a while or you have to settle for a job that pays less than what you’re used to making, you probably won’t be able to pay your monthly mortgage.

If you are a new homeowner, you will have no equity in your house, so you will make no money if you sell it. As a result, you may decide to leave your home.

Unfortunately, some neighborhoods change with time, and they can become rougher and not as safe as other families leave for one reason or another. This can make the area look unkempt and dirty or even bring your property values down.

The messier and more deserted the neighborhood gets, the easier it is for everyone who’s still living there to decide to move out as well. Selling a home in this scenario may be very hard which may make some people abandon their homes.

When a natural disaster occurs and wipes out your home, especially if you have no or too little insurance, some people choose to abandon the home. This is one of those situations where homeowners don’t know what to do.

If the insurance money isn’t enough to rebuild or there is no insurance money in the first place, some people may see it as the only option. There might be other options, of course, but sometimes abandoning the home makes the most sense for some people.

Lack of a Will

Sometimes, the owner of a home informally gives the house to someone in the family, but if there is no will or other documents the transfer of ownership of the house may take a long time. In this case, until a legal owner is found, the house may become abandoned.

A Major Employer Closes Down

If you live in an area that has a major employer and shuts its doors, it can make
homes become abandoned. Even if you find another job in a hurry, it might be an out-of-town job, and you might have to leave suddenly.

When this happens, sometimes large groups of people abandon their homes at the same time, which causes entire subdivisions to become unattractive to potential homebuyers.

Sometimes, people who have been living in their homes for a long time die or have to move into a nursing home, and unless the homeowner has made plans beforehand, the house can go empty and become abandoned.

Many times, people in nursing homes do not want to sell because they consider their situation temporary. Unfortunately, this is often not the case, which means the house can remain empty for an indefinite period of time and become abandoned.

Problems With the Home-Building Process

Developers sometimes buy numerous properties at once and yet find themselves running out of money before all of the homes are completed. This means that for an indefinite period of time, one or more homes will remain abandoned and unfinished.

Since we moved to Lewes, Delaware, we have seen many developments in the area. Some are finished fast, others take forever, and some houses stay unfinished for a long time.

Problems With the Rental Market

If the renters’ market is suffering, some property management companies decide to
abandon their properties temporarily, partly because, without renters, it is hard to afford the upkeep and maintenance of the homes.

In some cases, this is an accounting decision because it is often better financially to abandon the houses than it is to keep them up and take care of them. When the maintenance costs are higher than the rental income, the choice becomes obvious.

Sometimes, the local government scoops up numerous homes to make room for an
infrastructure project, and since these projects can take years to finalize and complete, the houses may remain empty that long as well.

This is something the citizens have no control over, but unfortunately, it sometimes affects their property values and their own ability to sell their homes when the time comes. It is not always a positive occurrence.

What Happens When a Property is Abandoned?

This video shows that you may have to think twice before abandoning your house. Abandoning your house doesn’t mean you can also abandon financial responsibilities that may be attached to the property. You may be responsible for payments due to your bank, local Government, etc.

There are numerous reasons why seeing abandoned houses isn’t that uncommon, especially when the economy is bad. In reality, it can happen to anyone, but in some instances, it is because the homeowners chose that option because it made things easier for them.