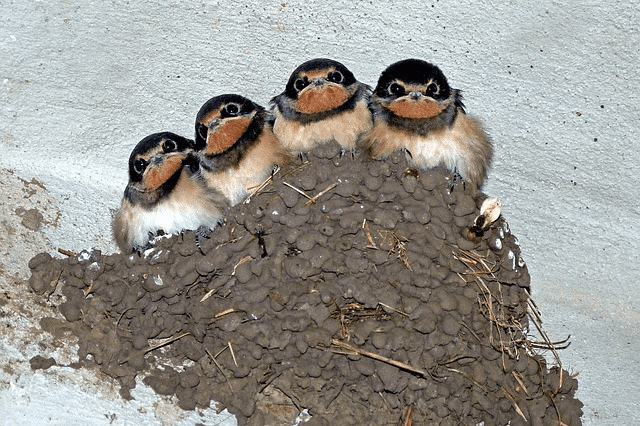 Every spring, barn swallows come and make nests in warehouses, barns, residences, and other buildings. They are beautiful birds with blue backs, dark orange faces, and a light-colored chest. They have long, pointed wings and a forked tail.

Although European legend says that barn swallows bring good luck, they can cause a great deal of damage to structures and leave droppings and urine, which can harm people’s health. They will swoop down to protect their nests, which they can build in as little as one day. However, barn swallows are good to reduce the mosquito population as they need to eat their weight in insects daily. And they are federally protected, so they have to be removed by a professional.

Our first spring in our new house in Lewes, Delaware, we noticed many different birds we haven’t seen in a while, such as grackles, red-winged blackbirds, robins, and barn swallows. The first thing we noticed about swallows was positive; they eat a lot of mosquitoes, which was a very nice natural control, especially for my wife, who gets bitten by mosquitoes a lot.

Then, we noticed that our front porch was full of mud and droppings as they built a nest on top of our front porch window. They are very messy little birds. They also dive bomb anyone near their nest, so that meant every time we went in or out of the front door, we were “under attack.”

Continue reading to learn whether or not swallows are good to have around.

Swallows Are Pretty But Can Be Annoying Fast

Some people love swallows because they are beautiful birds. They put birdseed in their feeders to attract them to their yards. European folklore says that it is good luck to see a swallow. However, most of these people don’t have properties where the swallows nest.

Swallows are also called barn swallows, and they can be a huge problem for people when they take up residence on their property. They can build a nest in just 24 hours, and once they find a spot, they return every year. It is hard to get rid of them once they decide that your building is where they want to live.

When swallows make a home in an open building, they can do a great deal of damage to the property. They are also a health hazard because they leave behind droppings and urine, which can cause viral infections and respiratory illnesses for some people. In addition, it can be expensive to repair the damage they cause. For this reason, you may consider calling a professional for removal if you find swallows living on your property.

It isn’t wise to take matters into your own hands. Barn swallows are federally protected, so you must call a professional to have them removed. They are protected because they are beneficial to the ecosystem.

We have experienced this almost daily while their nest was active. But, to be honest, we never felt threatened; it’s just cute, in our opinion.

Some people, like us, allow them to stay because they are beautiful and interesting to watch. They also eat flying insects, and they can reduce the mosquito population on your property. As long as you don’t approach their nests, they will not come after you. However, we learned that approaching their nest sometimes just means leaving your front door.

This video narrated by Jo Alwood exemplifies the love/hate relationship most homeowners feel for these territorial birds. The video was filmed at Columbia Bottom Conservation Area in St. Louis, MO.

How to Deter Swallows from Building Nests

Some people want to deter swallows from taking up residence in their barns or their outdoor buildings. First, you need to understand how they build their nests and why you should have them removed. They use mud as the base for their nest. Usually, they plaster it at a wall under an overhang or where a beam meets the wall. They want protection from rain and sun.

You can find them in the rafters of an attic, in a hayloft, or the top of your windows. They keep their nest clean, but they drop their droppings and other debris over the side and make a mess. These are some legal ways you can deter swallows from building nests.

You can try to deter them from building a nest by hanging shiny materials in spots where they like to make nests. Birds are scared of shiny objects. For example, you could use strips of aluminum foil or hang old CDs, or other shiny objects.

You can try to play sounds of alarm and distress calls of barn swallows to disrupt nest construction. Although this method may not be easy to implement, if you can replicate the distress sounds of swallows, they may never come near your property.

If they already have a nest, you can remove the empty nest. The swallow will probably build another the next day, but if you continue to remove it, they will find another place sooner or later. The problem is that it only takes them a day to build a nest, and they will probably go to another location on your property.

But remember that under the Migratory Bird Treaty Act, you may only destroy nests that do not have eggs or chicks within.

A factor to consider is that swallows live in colonies, even though pairs of birds nest together. So if there is one pair in your outbuilding, there are likely several others nearby. You need to deter all of them, which is challenging to do when you have buildings that are open and accessible.

How Many Kinds of Swallows Are There?

There are 75 different species of swallows across the world, but only eight live in North America. The most common that people see is the barn swallow. They are small and acrobatic in the air, and you can watch them fly after flying insects. They are fairly easy to identify because they have pointed wings that are at an angle and forked tails.

The swallows native to North America include the following:

The northern rough winged swallow gets its name from its small barbed feathers, and it lives in the openings of banks and gorges. The largest swallow is the purple martin, and they live in dead trees along rivers. The tree swallow and the violet green swallow live in trees and visit birdhouses.

Barn swallows are attractive birds that people enjoy watching, and legend says that they are good luck. However, they can do significant damage to your buildings, and they are very territorial. If you allow them to nest in your barn or other outbuildings, you may need to make expensive repairs. Also, keep in mind that they are federally protected, so you will need to have them removed by a professional.